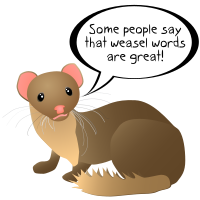 Weasel Words:  “words or statements that are intentionally ambiguous or misleading”

Being the political season, the air is full of ambiguous statements that dodge the real question, or slant the facts in favor of the speaker.  Who can forget:

Bill Clinton: “I did not have sex with that woman.”  (he didn’t consider “oral” to be “sex”, or “that woman” could be another woman other than the one we all thought he was speaking about.)

Trump: “The polls say I’m winning.”  Yea, your own polls, or a few outlier polls, but the Real Clear Politics average of all leading polls says something else completely.

Hillary Clinton:  About Benghazi “Some have sought to justify this vicious behavior as a response to inflammatory material posted on the Internet.”  Sure, “some people” say that, but you told your family it was a terrorist attack.

Weasel Words also came up recently when I was going through the 40 Years of Zen program (review post coming).   Dave Asprey has written about them here.  Then this morning while talking to the Purpose Goddesses Tay and Val, weasel words came up again.  The Universe obviously wants to hear my thought on this subject, so here I go.

Becoming more aware of my own use of weasel words has been an important part of my waking up and becoming more conscious.  When I find myself using some of the worst offenders, I endeavor to observe rather than indulge the judgemental thoughts (I just had to rewrite that from “try not to be judgemental”).  The words are neither good nor bad in and of themselves.  The issue is in the context and the intention behind their use as opposed to other words that could be used.  In the political sphere, a person is usually trying to dodge a direct question purposefully with misdirection.  We have all seen that.  On a personal basis and between people, weasel words can be serving some very valid goals including:

Recognition that the ego is just doing its job to protect me from pain and increase the chances of success has enabled me to be much less judgemental of my own use of these words.  When encountering my own use of a weasel word I ask myself

Often times lately I have reframed weasel words, sometimes they get through even an attentive filter like mine.  My personal reason for becoming aware of these words and working to get them out of my vocabulary is because they typically are impediments to action, destroy motivation, debilitate and discourage me from moving forward in life.  I have decided that brain energy spent on them is generally wasted and I would rather spend that energy on actually accomplishing something rather than the avoidance.

Here are my personal top 5 offenders:

To “try” lowers the bar so that success doesn’t require any actual accomplishment.  Try pre-supposes failure.  “Try” also doesn’t have any time table attached to it so the scale is open ended.  I can be “trying” for a very long time, years even.  Try doesn’t have a logical end point.  The name of the major category of this post used to be “Try This:”.  I thought “try” would be a less judgemental or declarative word that wouldn’t scare people as much as “do”. People would be more willing to “try” something that to be told to “do” something.  And that is probably true on the surface.  But here at DGC we are about waking up and taking the Red Pill.  The Red Pill says “There is no Try, Only Do.”  Ok, Yoda and the Maharishi said it before me, but even with my antennae on high alert, I still create a category with the word “try” in it.

Saying I “should” do something is the same as saying nothing. It is stating the obvious.  These statements are usually complete wastes of time, often procrastination of the actual work.  There is also an easy way out.  Stuff you “should” do is not very important, you “should” do it, but there are not obvious harsh consequences for not doing it.  I have often found myself saying I “should” do something 10-20 times before actually doing it.  “I should take out the trash.”  Taking no responsibility for actually doing the thing I “should” do.  It is a statement of desire not action.  Replace with action words.  What would your brain do with all that wasted energy?  You could have taken out the trash in a fraction of all the time your brain was saying you “should” take out the trash.

The near cousin of “should” but with an absolutist set of blinders on.  Much more declarative.  “Need” ratchets up “should” with the implication of dire consequences if you don’t do it.  “Have to” leaves all alternatives off the table, there are no alternatives, I “have to.”  Ratcheting up the pressure like that the ego wants to force you to get that thing done. “I need to get the new Apple Iphone.”  “I Have to get tickets to the play offs.”  The existential stress goes up accordingly. So ask yourself the question, is this story I am telling myself about “need” or “have to” really an existential question?  Are there truly dire consequences of not doing this?  Does your rational mind agree with the upleveling of this desire to the “need” category that your ego has done?  Stop and ask the question.

Reframe:  Ratchet down the consequences.  Change to “want” or “get to”

For me, the worst kind of weasel words are those that cut off all options.  That put up walls to progress of any sort.  “Can’t” does that but shutting down discussion.  There is no way, I “can’t”.  No explanation, to alternatives, no deliberation.  Just a clean line in the sand.  I heard Seth Godin talking one time about writers block and deconstructing the claim “I can’t write.”.  “Really?  you forgot how to use a pen?  Your fingers are broken?”  The point is that the story “I can’t write” is not true. You can, technically.  The real underlying issue is that your ego is afraid that what you write might suck.  Or that the writing will cause the brain to heat up and hurt.  Or that there will be editing and re-writing.  “Can’t” just killed your motivation.  Cut off any forward motion.  Until you break that story, no progress will be made.  Specifically around writing that is why I love the Morning pages exercise.  Write for fifteen minutes a day without judgement, without critique.  Just fucking write.  You can do it.  Break the block.  Rewrite the story in your head. You CAN write.  Now go on and write something good.

Reframe: Can.  or if you are honest about not doing something, say “I won’t”.

In an era of participation trophies this one is a killer on our kids.  This word is WAY over used.  This one should be very parsimoniously given out.  Save it for the big things.  “I am so proud of you for getting that trophy!”  Dude, it a participation trophy.  This is the Near cousin of Try.  You are “proud” that your kid “tried”.  Talk about a low bar.  Be proud of actual achievements.  Or complement effort.  My daughter was recently in the regional championship meet for her high school swim team.  She is a middle of the pack swimmer so didn’t have any expectations of winning or medaling and I didn’t want her to be focused on those things anyway.  In the meet she achieved a personal PR in her 50 meter and 100 meter swim!  I didn’t say I was “proud” of her.  I complimented her on finishing the season with a bang.  Finishing with the best effort she had had all year, a Personal Record.  Congratulations.  A PR is an actual achievement.  A measurable accomplishment.  Take note of that.

Reframe:  Your effort was very impressive.  Save “pride” for your country.

My personal goal is to reduce the use of these five words by 50% next year over this year.  As with “Do This” posts, your personal mileage may vary.  Your goals may vary.  Everyone though can benefit from a little more consciousness in relation to our vocabulary and how it reflects the stories in our heads.  Be aware.  Be precise.  Be awake.

3 thoughts on “DO This: Rid your vocabulary of Weasel Words”